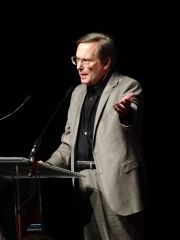 William Friedkin (; born August 29, 1935) is an American film and television director, producer and screenwriter closely identified with the "New Hollywood" movement of the 1970s. Beginning his career in documentaries in the early 1960s, he is perhaps best known for directing the action thriller film The French Connection (1971), which won five Academy Awards, including Best Picture, Best Adapted Screenplay and Best Director, and the supernatural horror film The Exorcist (1973), which earned him a nomination for the Academy Award for Best Director. His other films include The Boys in the Band (1970), the suspense thriller Sorcerer (1977), the controversial crime film Cruising (1980), the action thriller To Live and Die in L.A. Read more on Wikipedia

William Friedkin is most famous for directing the horror film The Exorcist.