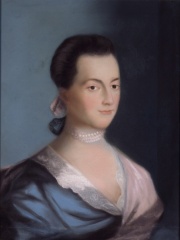 Abigail Adams (née Smith; November 22, [O.S. November 11] 1744 – October 28, 1818) was the wife and closest advisor of John Adams, as well as the mother of John Quincy Adams. She is sometimes considered to have been a Founder of the United States, and is now designated as the second first lady of the United States, although this title was not used at the time. She and Barbara Bush are the only two women to have been married to one U.S. president and the mother of another.Adams's life is one of the most documented of the First Ladies: she is remembered for the many letters she wrote to her husband while he stayed in Philadelphia, Pennsylvania, during the Continental Congresses. Read more on Wikipedia

Among companions, Abigail Adams ranks 438 out of 687. Before her are Louise de Coligny, Maria Clementina Sobieska, Irene of Montferrat, Jane Boleyn, Viscountess Rochford, Al-Muqtadi, and Sitre. After her are Adela of Flanders, Despina Khatun, Queen Máxima of the Netherlands, Osburh, Margaret of Denmark, Queen of Scotland, and Agnes of Austria.