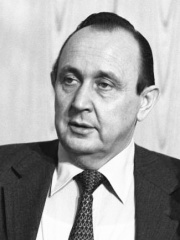 Hans-Dietrich Genscher (21 March 1927 – 31 March 2016) was a German statesman and a member of the liberal Free Democratic Party (FDP), who served as Federal Minister of the Interior from 1969 to 1974, and as Federal Minister for Foreign Affairs and Vice Chancellor of Germany from 1974 to 1992 (except for a two-week break in 1982, after the FDP had left the Third Schmidt cabinet), making him the longest-serving occupant of either post and the only person to have held one of these positions under two different Chancellors of the Federal Republic of Germany. In 1991 he was chairman of the Organization for Security and Co-operation in Europe (OSCE). A proponent of Realpolitik, Genscher has been called "a master of diplomacy". Read more on Wikipedia

Hans-Dietrich Genscher is most famous for being the German Foreign Minister from 1974 to 1992. He is credited with the reunification of Germany and the end of the Cold War.

Among politicians, Hans-Dietrich Genscher ranks 3,325 out of 15,577. Before him are Zalman Shazar, Gevherhan Sultan, Mojmir I of Moravia, Cleitus the Black, Mihnea cel Rău, and William II of Holland. After him are Cordell Hull, Henry II, Count of Champagne, Gottlob Berger, Aleksandar Ranković, Lady Margaret Beaufort, and Otto I, Duke of Saxony.