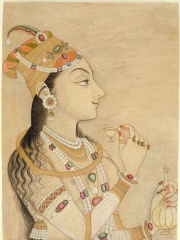 Nur Jahan (born Mehr-un-Nissa, c. 1577 – 18 December 1645) was the twentieth (and last) wife of the Mughal emperor Jahangir and is considered by historians to have been the real power behind the throne for much of her husband's reign. Nur Jahan was born Mehr-un-Nissa, the daughter of a Grand Vizier (Minister) who served under Akbar. Read more on Wikipedia

Nur Jahan was a powerful Mughal empress who was married to Emperor Jahangir. She was one of the most powerful women in the world at the time, and is most famous for her contribution to the building of the Taj Mahal.

Among companions, Nur Jahan ranks 289 out of 687. Before her are Dorothea of Brandenburg, Elizabeth of Bohemia, Berengaria of Portugal, Laura Bush, Anna Porphyrogenita, and Rosalynn Carter. After her are Catherine, Duchess of Cambridge, Adelaide of Aquitaine, Maria Sophia of Neuburg, Charles Lightoller, Joan of Navarre, Queen of England, and Queen Rania of Jordan.

Among COMPANIONS In Afghanistan