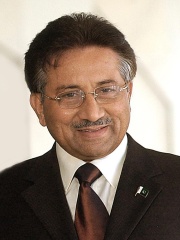 Pervez Musharraf (Urdu: پرویز مشرف‎ Parvez Muśarraf; born 11 August 1943) is a Pakistani politician and a retired four-star general who became the tenth president of Pakistan after the successful military takeover of the federal government in 1999. He held the presidency from 2001 until 2008, when he tendered his resignation to avoid impeachment.Born in Delhi during the British Raj, Musharraf was raised in Karachi and Istanbul. He studied mathematics at Forman Christian College in Lahore and was also educated at the Royal College of Defence Studies in the United Kingdom. Read more on Wikipedia

Pervez Musharraf is most famous for being the president of Pakistan from 1999 to 2008. He is also known for suspending Pakistan's constitution and imposing martial law in 2007.