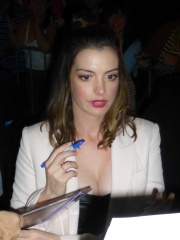 Anne Jacqueline Hathaway (born November 12, 1982) is an American actress. The recipient of many awards, including an Academy Award, a Primetime Emmy Award, and a Golden Globe, she was one of the highest-paid actresses in the world in 2015. Read more on Wikipedia

Since 2007, the English Wikipedia page of Anne Hathaway has received more than 19,857,178 page views. Her biography is available in 84 different languages on Wikipedia making her the 621st most popular actor.

Among people born in 1982, Anne Hathaway ranks 3. Before her are Catherine, Duchess of Cambridge and Kaká. After her are Prince William, Duke of Cambridge, Petr Čech, Lil Wayne, Eddie Redmayne, Kirsten Dunst, Víctor Valdés, Adriano, Jessica Biel, and Priyanka Chopra.