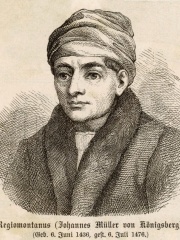 Johannes Müller von Königsberg (6 June 1436 – 6 July 1476), better known as Regiomontanus (), was a mathematician, astrologer and astronomer of the German Renaissance, active in Vienna, Buda and Nuremberg. His contributions were instrumental in the development of Copernican heliocentrism in the decades following his death. Regiomontanus wrote under the Latinized name of Ioannes de Monteregio (or Monte Regio; Regio Monte); the toponym Regiomontanus was first used by Philipp Melanchthon in 1534. Read more on Wikipedia

Regiomontanus is most famous for his work in astronomy. He was the first person to create a star catalog and map of the sky.

Page views of Regiomontanuses by language

Among people born in 1436, Regiomontanus ranks 1. After him are Francisco Jiménez de Cisneros, Leonardo Loredan, Francesco del Cossa, Tizoc, Louis of Cyprus, and Henry Beaufort, 3rd Duke of Somerset. Among people deceased in 1476, Regiomontanus ranks 3. Before him are Vlad the Impaler and Simonetta Vespucci. After him are Galeazzo Maria Sforza, Jean II, Duke of Alençon, Isabel Neville, Duchess of Clarence, Frederick I, Elector Palatine, Agnes of Burgundy, Duchess of Bourbon, George VIII of Georgia, Stefan Branković, and Pietro Mocenigo.