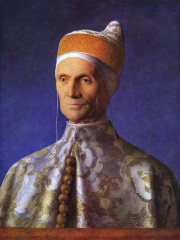 Leonardo Loredan (16 November 1436 – 22 June 1521) was the 75th doge of the Republic of Venice from 1501 until his death in 1521. A wartime ruler, his dogeship was one of the most important in the history of Venice. Loredan's reign began during the disastrous second Ottoman–Venetian War, which he settled with a peace treaty in 1503 at the cost of considerable loss of territory. Read more on Wikipedia

Among politicians, Leonardo Loredan ranks 5,108 out of 15,710. Before him are Matthias Erzberger, Shebitku, Sumu-la-El, Kerbogha, Lothar de Maizière, and Tammam Salam. After him are Cleomenes II, Carlos Saavedra Lamas, Kalākaua, Milan Hodža, Edward Gierek, and Prince Frederick of the Netherlands.

Among people born in 1436, Leonardo Loredan ranks 4. Before him are Regiomontanus, Francisco Jiménez de Cisneros, and Francesco del Cossa. After him are Tizoc, Louis of Cyprus, and Henry Beaufort, 3rd Duke of Somerset. Among people deceased in 1521, Leonardo Loredan ranks 10. Before him are Josquin des Prez, Juan Ponce de León, Zhengde Emperor, Sebastian Brant, Christina of Saxony, and Suzanne, Duchess of Bourbon. After him are Francisco Serrão, Raffaele Riario, Duarte Barbosa, and Tamás Bakócz.