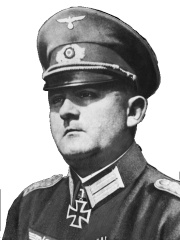 Dietrich Hugo Hermann von Choltitz (German pronunciation: [ˈdiːtʁɪç fɔn ˈkɔltɪts]; 9 November 1894 – 5 November 1966) was a German general. Popularly known as the Saviour of Paris, he served in the Wehrmacht (armed forces) of Nazi Germany during World War II, as well as serving in the Reichswehr of the Weimar Republic, and the Royal Saxon Army during World War I. Born into an aristocratic Prussian family with a long history of military service, Choltitz joined the army at a young age and saw service on the Western Front during the First World War (1914–1918). He rose to the rank of Leutnant by the end of the war and was active in the interwar period helping Germany rebuild its armed forces. Read more on Wikipedia

Dietrich von Choltitz was a German general who was in charge of the defence of Paris during World War II. He is most famous for his refusal to obey Adolf Hitler's order to destroy Paris.

Among military personnels, Dietrich von Choltitz ranks 202 out of 1,466. Before him are Wilhelm Burgdorf, Kurt Meyer, Pittacus of Mytilene, Syagrius, Helmuth von Moltke the Younger, and Roman von Ungern-Sternberg. After him are Parmenion, Lysander, Tadamichi Kuribayashi, Hasso von Manteuffel, Oenomaus, and Tōgō Heihachirō.