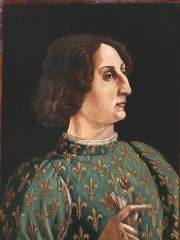 Galeazzo Maria Sforza (24 January 1444 – 26 December 1476) was the fifth Duke of Milan from 1466 until his assassination a decade later. He was notorious for being lustful, cruel, and tyrannical. He was born to Francesco Sforza, a popular condottiero and ally of Cosimo de' Medici who would gain the Duchy of Milan in 1450, and Bianca Maria Visconti. Read more on Wikipedia

Among noblemen, Galeazzo Maria Sforza ranks 128 out of 842. Before him are Odo of France, Grand Duke Kirill Vladimirovich of Russia, Maria Goretti, Michael Andreas Barclay de Tolly, Francis, Duke of Saxe-Coburg-Saalfeld, and Caroline Matilda of Great Britain. After him are Prince Leopold of Bavaria, Miguel I of Portugal, Sophia of Hanover, Cosimo II de' Medici, Grand Duke of Tuscany, Grand Duke Sergei Alexandrovich of Russia, and Leopold III, Duke of Austria.

Among people born in 1444, Galeazzo Maria Sforza ranks 1. After him are Gaston, Prince of Viana, Dionisius, and Nilakantha Somayaji. Among people deceased in 1476, Galeazzo Maria Sforza ranks 4. Before him are Vlad the Impaler, Simonetta Vespucci, and Regiomontanus. After him are Jean II, Duke of Alençon, Isabel Neville, Duchess of Clarence, Frederick I, Elector Palatine, Agnes of Burgundy, Duchess of Bourbon, George VIII of Georgia, Stefan Branković, and Pietro Mocenigo.