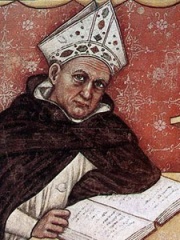 Albertus Magnus (before 1200 – November 15, 1280), also known as Saint Albert the Great and Albert of Cologne, was a German Catholic Dominican friar and bishop. Later canonised as a Catholic saint, he was known during his lifetime as Doctor universalis and Doctor expertus and, late in his life, the sobriquet Magnus was appended to his name. Scholars such as James A. Weisheipl and Joachim R. Söder have referred to him as the greatest German philosopher and theologian of the Middle Ages. Read more on Wikipedia

Since 2007, the English Wikipedia page of Albertus Magnus has received more than 777,990 page views. His biography is available in 66 different languages on Wikipedia making him the 136th most popular religious figure.

Most Popular RELIGIOUS FIGURES in Wikipedia