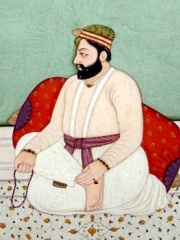 Guru Hargobind (Gurmukhi: ਗੁਰੂ ਹਰਿਗੋਬਿੰਦ, pronunciation: [gʊɾuː ɦəɾgoːbɪn̯d̯ᵊ], 19 June 1595 – 28 February 1644), revered as the sixth Nanak, was the sixth of ten Gurus of the Sikh religion. He had become Guru at the young age of eleven, after the execution of his father, Guru Arjan, by the Mughal emperor Jahangir.Guru Hargobind introduced the process of militarization to Sikhism, likely as a response to his father's execution and to protect the Sikh community. He symbolized it by wearing two swords, representing the dual concept of miri and piri (temporal power and spiritual authority). Read more on Wikipedia

Among politicians, Guru Hargobind ranks 8,437 out of 15,710. Before him are Agum II, Skule Bårdsson, Caratacus, Otto V, Margrave of Brandenburg-Salzwedel, Halil Kut, and Marcus Livius Drusus. After him are Joseph Kabila, Paul Vanden Boeynants, Michael of Trebizond, Roger of Salerno, Henry Morgenthau Jr., and Armand Călinescu.