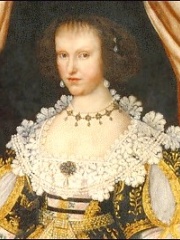 Anna Vasa of Sweden (also Anne, Polish: Anna Wazówna; 17 May 1568 – 26 February 1625) was a Polish and Swedish princess, starosta of Brodnica and Golub. She was the youngest child of King John III of Sweden and Catherine Jagiellon. She was close to her brother Sigismund Vasa, King of Poland (1587–1632) and King of Sweden (1592–99). Read more on Wikipedia

Page views of Anna Vasa of Swedens by language

Among politicians, Anna Vasa of Sweden ranks 7,874 out of 15,577. Before her are Charles Dupuy, Chiang Fang-liang, Catherine Ashton, Sigismund Rákóczi, Princess Elisabeth, Duchess of Hohenberg, and Azarmidokht. After her are Ferdinando Gonzaga, Duke of Mantua, Mstislav of Chernigov, Vladislav I of Wallachia, Ivo Sanader, Benjamin Mkapa, and Arturo Frondizi.

Among people born in 1568, Anna Vasa of Sweden ranks 10. Before her are Aloysius Gonzaga, Gunilla Bielke, Wei Zhongxian, Adriano Banchieri, Virginia de' Medici, and Giuseppe Cesari. After her are Christian I, Prince of Anhalt-Bernburg, Teodósio II, Duke of Braganza, Marino Ghetaldi, Michael Maier, Pieter Both, and Augustus the Elder, Duke of Brunswick-Lüneburg. Among people deceased in 1625, Anna Vasa of Sweden ranks 14. Before her are Willem Schouten, Duchess Anna of Prussia, Giambattista Marino, Mōri Terumoto, Francisco Gómez de Sandoval, 1st Duke of Lerma, and Honoré d'Urfé. After her are Orlando Gibbons, John Fletcher, Elizabeth of Denmark, Duchess of Brunswick-Wolfenbüttel, Joachim Ernst, Margrave of Brandenburg-Ansbach, Ubbo Emmius, and John Florio.