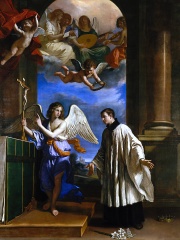 Aloysius de Gonzaga (Italian: Luigi Gonzaga; 9 March 1568 – 21 June 1591) was an Italian aristocrat who became a member of the Society of Jesus. While still a student at the Roman College, he died as a result of caring for the victims of a serious epidemic. Read more on Wikipedia

Aloysius Gonzaga was born in 1568 in Castiglione, Italy. He was the son of Ferrante Gonzaga and Margaret Paleologo. Aloysius Gonzaga was a Jesuit priest and a member of the Society of Jesus. He died on March 9, 1655. He is most famous for his life of self-sacrifice and piety.

Among people born in 1568, Aloysius Gonzaga ranks 3. Before him are Pope Urban VIII and Tommaso Campanella. After him are Jan Brueghel the Elder, Wei Zhongxian, Adriano Banchieri, Gunilla Bielke, Virginia de' Medici, Christian I, Prince of Anhalt-Bernburg, Giuseppe Cesari, Michael Maier, and Marino Ghetaldi. Among people deceased in 1591, Aloysius Gonzaga ranks 4. Before him are Pope Gregory XIV, Pope Innocent IX, and John of the Cross. After him are Vincenzo Galilei, Veronica Franco, Sen no Rikyū, Dmitry of Uglich, Jacobus Gallus, Christian I, Elector of Saxony, Luis de León, and Vespasiano I Gonzaga.