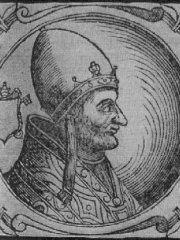 Pope Adrian IV (Latin: Adrianus IV; born Nicholas Breakspear (or Brekespear); c. 1100 – 1 September 1159, also Hadrian IV), was head of the Catholic Church and ruler of the Papal States from 4 December 1154 to his death in 1159. He is the only Englishman to have been pope. Adrian was born in Hertfordshire, England, but little is known of his early life. Read more on Wikipedia

Pope Adrian IV is most famous for being the first pope to grant England its independence from the Catholic Church.

Among religious figures, Pope Adrian IV ranks 679 out of 2,238. Before him are Martin de Porres, Mahākāśyapa, Lydia of Thyatira, Atiśa, Cornelius the Centurion, and Athenagoras of Athens. After him are Émile Benveniste, Erasmus of Formia, Romanos the Melodist, Johann Tetzel, Guru Gobind Singh, and Paulo Miki.

Among people born in 1100, Pope Adrian IV ranks 11. Before him are Pope Honorius II, Pope Lucius II, Pope Celestine II, Pope Innocent II, Albert the Bear, and Suleiman ibn Qutulmish. After him are Sverker I of Sweden, Emperor Qinzong, Najm ad-Din Ayyub, Inge the Elder, Shirkuh, and Antipope Gregory VIII. Among people deceased in 1159, Pope Adrian IV ranks 1. After him are Joscelin II, Count of Edessa, Władysław II the Exile, Bertha of Sulzbach, Agnes of Aquitaine, Queen of Aragon, and William I, Count of Boulogne.