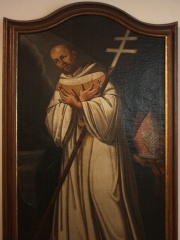 Malachy (; Middle Irish: Máel Máedóc Ua Morgair; Modern Irish: Maelmhaedhoc Ó Morgair; Latin: Malachias) (1094 – 2 November 1148) is an Irish saint who was Archbishop of Armagh, to whom were attributed several miracles and an alleged vision of 112 popes later attributed to the apocryphal (i.e. of doubtful authenticity) Prophecy of the Popes. Malachy was the first native-born Irish saint to be formally canonised. Read more on Wikipedia

Saint Malachy is most famous for his prophecies about the popes, which he wrote in the 12th century.

Among religious figures, Saint Malachy ranks 671 out of 2,272. Before him are Philemon, Hans Egede, Eli, Saint Cajetan, Frances of Rome, and Itzhak Stern. After him are Sa'id bin Zayd, Margot Frank, Yasuke, Zayd ibn Ali, Sabbas the Sanctified, and Kinga of Poland.