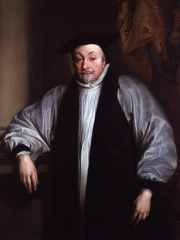 William Laud, 7 October 1573 to 10 January 1645, was a priest in the Church of England, appointed Archbishop of Canterbury by Charles I in 1633. A key advocate of Charles' religious reforms, he was arrested by Parliament in 1640, and executed towards the end of the First English Civil War in January 1645. A firm believer in Episcopalianism, or rule by bishops, 'Laudianism' refers to liturgical practices designed to enforce uniformity within the Church of England, as outlined by Charles. Read more on Wikipedia

Since 2007, the English Wikipedia page of William Laud has received more than 361,723 page views. His biography is available in 30 different languages on Wikipedia making him the 415th most popular religious figure.

Among religious figures, William Laud ranks 415 out of 2,001. Before him are Dionysius the Areopagite, Pope Constantine, Gregory the Illuminator, Pope Eleutherius, Simon Magus, and Abu Hurairah. After him are Pancras of Rome, Bruno of Cologne, Rose of Lima, Pope John XI, Muhammad al-Baqir, and Abd Allah ibn Abbas.