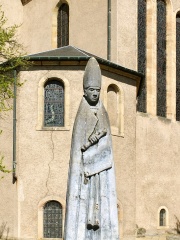 Willibrord (Latin: Villibrordus; c. 658 – 7 November AD 739) was an Anglo-Saxon missionary and saint, known as the "Apostle to the Frisians" in the modern Netherlands. Read more on Wikipedia

Since 2007, the English Wikipedia page of Willibrord has received more than 187,171 page views. His biography is available in 29 different languages on Wikipedia (up from 28 in 2019). Willibrord is the 742nd most popular religious figure (down from 737th in 2019), the 720th most popular biography from United Kingdom (up from 731st in 2019) and the 14th most popular British Religious Figure.

Willibrord was a missionary and saint who was sent by the Pope to convert the pagan Frisians in the 8th century. He was successful in converting them and established a monastery in Utrecht.

Page views of Willibrords by language

Among religious figures, Willibrord ranks 742 out of 2,238. Before him are Adnan, Brother Roger, Kinga of Poland, Euphemia, Ilia II of Georgia, and Raymond of Penyafort. After him are Itzhak Stern, Antipope Boniface VII, Expeditus, Thaïs, Angela of Foligno, and Albert of Brandenburg.