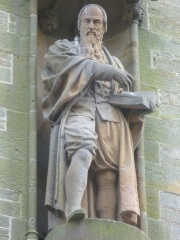 John Knox (c. 1514 – 24 November 1572) was a Scottish minister, theologian, and writer who was a leader of the country's Reformation. He was the founder of the Presbyterian Church of Scotland. Born in Giffordgate, a street in Haddington, East Lothian, Knox is believed to have been educated at the University of St Andrews and worked as a notary-priest. Read more on Wikipedia

Since 2007, the English Wikipedia page of John Knox has received more than 1,948,254 page views. His biography is available in 55 different languages on Wikipedia making him the 455th most popular religious figure.

Among religious figures, John Knox ranks 455 out of 2,001. Before him are Christina of Bolsena, James, son of Alphaeus, Saint Maurice, Pope Sisinnius, Eric IX of Sweden, and Antipope Clement VII. After him are Pope Stephen I, Paul of Thebes, Pope Nicholas II, Eber, Josemaría Escrivá, and Jehoshaphat.