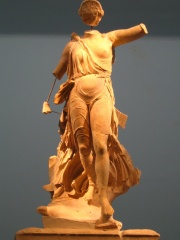 Paeonius (Greek: Παιώνιος Paiṓnios) of Mende, Chalkidiki was a Greek sculptor of the late 5th century BC. He most likely received his early training in Northern Greece and is thought to have later adapted Athenian stylistic elements into his own work, based upon his probable interaction with the Olympia workshop of Phidias. In any case, he was “attic-trained.”Paeonius won the commission to decorate the acroteria of the Temple of Zeus at Olympia, as described in the pedestal inscription on his Nike statue. An ancient account also references Paeonius' work at Olympia. Read more on Wikipedia

Page views of Paeoniuses by language

Among sculptors, Paeonius ranks 60 out of 190. Before him are Étienne Maurice Falconet, Antenor, Franz Xaver Messerschmidt, Wäinö Aaltonen, Jean-Baptiste Pigalle, and Cephisodotus the Elder. After him are Andreas Schlüter, Andrea Sansovino, Yaacov Agam, David d'Angers, Francesco Laurana, and Agoracritus.

Among people born in 500 BC, Paeonius ranks 39. Before him are Parrhasius, Perdiccas II of Macedon, Hermocrates, Psammuthes, Theagenes of Thasos, and Cephisodotus the Elder. After him are Marcus Manlius Capitolinus, Agoracritus, Diagoras of Rhodes, Apollodorus, Anytus, and Callicratidas. Among people deceased in 460 BC, Paeonius ranks 5. Before him are Mnesikles, Ajatashatru, Agatharchus, and Parrhasius. After him are Diagoras of Rhodes, Apollodorus, Gylippus, Pharnabazus II, Calamis, Telesilla, and Hippo.

Others Deceased in 460 BC