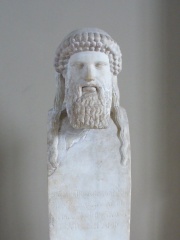 Alcamenes (Ancient Greek: Ἀλκαμένης) was an ancient Greek sculptor of Lemnos and Athens, who flourished in the 2nd half of the 5th century BC. He was a younger contemporary of Phidias and noted for the delicacy and finish of his works, among which a Hephaestus and an Aphrodite of the Gardens were conspicuous.Pausanias says that he was the author of one of the pediments of the temple of Zeus at Olympia, but this seems a chronological and stylistic impossibility. Pausanias also refers to a statue of Ares by Alcamenes that was erected on the Athenian agora, which some have related to the Ares Borghese. Read more on Wikipedia

Alcamenes is most famous for being the sculptor of the statue of Zeus at Olympia.

Page views of Alcamenes by language

Among people born in 500 BC, Alcamenes ranks 24. Before him are Meton of Athens, Pāṇini, Mnesikles, Ajatashatru, Polygnotus, and Fan Li. After him are Parysatis, Archelaus, Eubulides, Cleombrotus I, Pleistoanax, and Amyntas II of Macedon. Among people deceased in 400 BC, Alcamenes ranks 7. Before him are Aspasia, Xanthippe, Damocles, Zeuxis, Thaïs, and Leochares. After him are Teos of Egypt, Parysatis, Ctesias, Eubulides, Phaedo of Elis, and Cephisodotus the Elder.