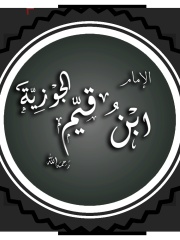 Shams al-Dīn Abū ʿAbd Allāh Muḥammad ibn Abī Bakr ibn Ayyūb al-Zurʿī l-Dimashqī l-Ḥanbalī (29 January 1292–15 September 1350 CE / 691 AH–751 AH), commonly known as Ibn Qayyim al-Jawziyya ("The son of the principal of [the school of] Jawziyyah") or Ibn al-Qayyim ("Son of the principal"; ابن القيّم) for short, or reverentially as Imam Ibn al-Qayyim in Sunni tradition, was an important medieval Islamic jurisconsult, theologian, and spiritual writer. Belonging to the Hanbali school of orthodox Sunni jurisprudence, of which he is regarded as "one of the most important thinkers," Ibn al-Qayyim was also the foremost disciple and student of Ibn Taymiyyah, with whom he was imprisoned in 1326 for dissenting against established tradition during Ibn Taymiyyah's famous incarceration in the Citadel of Damascus.Of humble origin, Ibn al-Qayyim's father was the principal (qayyim) of the School of Jawziyya, which also served as a court of law for the Hanbali judge of Damascus during the time period. Ibn al-Qayyim went on to become a prolific scholar, producing a rich corpus of "doctrinal and literary" works. Read more on Wikipedia

Ibn Qayyim al-Jawziyya is most famous for his book al-Wabil al-Sayyib min al-Kalim al-Tayyib. The book is a commentary on the famous work by the scholar Imam Al-Ghazali, Ihya Ulum al-Din.

Among religious figures, Ibn Qayyim al-Jawziyya ranks 618 out of 2,272. Before him are Pope Alexander II, Nicodemus, Thecla, Giulia Farnese, Mordecai, and Je Tsongkhapa. After him are Isaac Luria, Tarcisio Bertone, Nehemiah, Maria al-Qibtiyya, Onuphrius, and Athenagoras I of Constantinople.

Among people born in 1292, Ibn Qayyim al-Jawziyya ranks 2. Before him is John VI Kantakouzenos. After him are Joan II, Countess of Burgundy, Elizabeth of Bohemia, Stephen II, Ban of Bosnia, and Elisenda of Montcada. Among people deceased in 1350, Ibn Qayyim al-Jawziyya ranks 3. Before him are Philip VI of France and Alfonso XI of Castile. After him are Namdev, Odo IV, Duke of Burgundy, Yoshida Kenkō, Cápac Yupanqui, Tribhuwana Wijayatunggadewi, Juan Ruiz, Johannes de Muris, and Dafydd ap Gwilym.