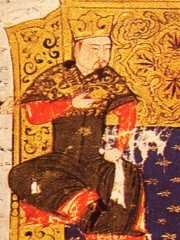 Tolui (c.1191–1232) was the fourth son of Genghis Khan by his chief khatun Börte. His ulus, or territorial inheritance, at his father's death in 1227 was the homelands in Mongolia, and he also served as civil administrator until 1229, the time it took to confirm Ögedei as second Great Khan of the Mongol Empire (1206–1368). Before that he had served with distinction in the campaigns against the Jin dynasty, the Western Xia and the Khwarezmid Empire, where he was instrumental in the capture and massacre at Merv and Nishapur. Read more on Wikipedia

Since 2007, the English Wikipedia page of Tolui has received more than 691,959 page views. His biography is available in 46 different languages on Wikipedia (up from 45 in 2019). Tolui is the 318th most popular politician (down from 299th in 2019), the 4th most popular biography from Mongolia (down from 3rd in 2019) and the 3rd most popular Mongolian Politician.

Tolui is most famous for being the son of Genghis Khan and the father of Möngke Khan.

Page views of Toluis by language

Among politicians, Tolui ranks 318 out of 15,710. Before him are Louis XI of France, Kangxi Emperor, Gerald Ford, Djoser, Qianlong Emperor, and Philip V of Spain. After him are Bhumibol Adulyadej, Charles II of Spain, Ahmed II, Haile Selassie, Alcibiades, and François Mitterrand.