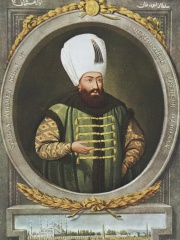 Ahmed I (Ottoman Turkish: احمد اول Aḥmed-i evvel; Turkish: I. Ahmed; 18 April 1590 – 22 November 1617) was Sultan of the Ottoman Empire from 1603 until his death in 1617. Ahmed's reign is noteworthy for marking the first breach in the Ottoman tradition of royal fratricide; henceforth Ottoman rulers would no longer systematically execute their brothers upon accession to the throne. Read more on Wikipedia

Ahmed I is most famous for being the Sultan of the Ottoman Empire from 1617 to 1618. He was a military man, and he led the Ottoman army to victory in several battles.

Page views of Ahmed IS by language

Among politicians, Ahmed I ranks 57 out of 15,577. Before him are Saddam Hussein, Boris Yeltsin, Nebuchadnezzar II, Nikita Khrushchev, Marcus Aurelius, and Fidel Castro. After him are Martin Van Buren, Josip Broz Tito, Benjamin Franklin, Mehmed the Conqueror, Nicholas II of Russia, and Henry Kissinger.