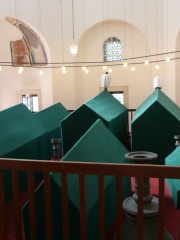 Halime Sultan (Ottoman Turkish: حلیمه سلطان, "the gentle one" or "the patient one") was a consort of Sultan Mehmed III, and the mother of Sultan Mustafa I. The first woman to be Valide Sultan twice and the only to be Valide twice of a same son. She had at least four children with Mehmed: two sons Şehzade Mahmud and Mustafa I, and two daughters Hatice Sultan and Şah Sultan. She was de facto co-ruler as Valide Sultan from 22 November 1617 to 26 February 1618 and from 19 May 1622 to 10 September 1623, because her son was mentally instable. Read more on Wikipedia

Among politicians, Halime Sultan ranks 945 out of 15,577. Before her are Balbinus, Ali Pasha of Ioannina, Alberto Fujimori, Archduchess Marie Valerie of Austria, Vasili III of Russia, and Princess Ludovika of Bavaria. After her are Lysimachus, Alfonso XII of Spain, Nikolai Bukharin, Nadezhda Krupskaya, Ptolemy XII Auletes, and Onan.