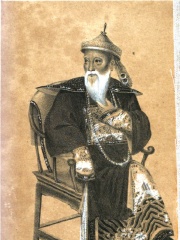 Lin Zexu (30 August 1785 – 22 November 1850), courtesy name Yuanfu, was a Chinese political philosopher and politician. He was the head of states (Viceroy), Governor General, scholar-official, and under Emperor of the Qing dynasty best known for his role in the First Opium War of 1839–42. He was from Fuzhou, Fujian Province. Read more on Wikipedia

Lin Zexu was a Chinese official who served in the Qing Dynasty. He is most famous for his refusal to allow the British to take opium into China, and he ordered the destruction of more than 20,000 chests of opium.

Among politicians, Lin Zexu ranks 2,840 out of 15,577. Before him are Cleopatra VI of Egypt, Lu Xun, Natalya Naryshkina, Guy III of Spoleto, Irene of Hungary, and Bindusara. After him are Gina Haspel, Wilhelm Miklas, Duke of Zhou, Michał Korybut Wiśniowiecki, Agostinho Neto, and Hasdrubal the Fair.