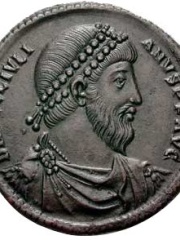 Julian (Latin: Flavius Claudius Julianus; Greek: Ἰουλιανός Iulianos; 331 – 26 June 363) was Roman emperor from 361 to 363, as well as a notable philosopher and author in Greek. His rejection of Christianity, and his promotion of Neoplatonic Hellenism in its place, caused him to be remembered as Julian the Apostate in Christian tradition.Julian was a member of the Constantinian dynasty; his father Julius Constantius was a half-brother of Emperor Constantine the Great. After Constantine died in 337, his sons had many of their relatives executed to prevent rival claims to the throne. Read more on Wikipedia

Julian is most famous for his work in the field of paleontology. He is credited with discovering the first pterosaur fossil and he also discovered a number of other prehistoric animals that are now extinct.

Page views of Julians by language

Among politicians, Julian ranks 277 out of 15,710. Before him are Clara Zetkin, António de Oliveira Salazar, Edward V of England, Pompey, Elagabalus, and Wu Zetian. After him are Golda Meir, Khafra, Edward II of England, Lee Kuan Yew, Bill Clinton, and Herod Antipas.