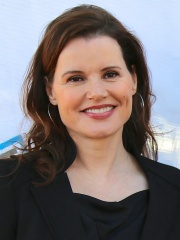 Virginia Elizabeth "Geena" Davis (born January 21, 1956) is an American actress, activist, producer, and former model. She is the recipient of an Academy Award and a Golden Globe Award, and has been nominated for a British Academy Film Award and a Primetime Emmy Award. In 2019, she received the Jean Hersholt Humanitarian Award for her work fighting gender bias on and off-screen in Hollywood.Having graduated with a bachelor's degree in drama from Boston University, Davis made her acting debut in the film Tootsie (1982) and eventually starred in the thriller The Fly (1986), which proved to be one of her first box office hits. Read more on Wikipedia

Geena Davis is most famous for her roles in Beetlejuice, Thelma and Louise, and A League of Their Own.