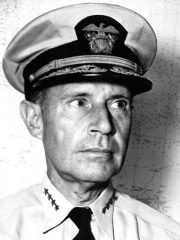 Raymond Ames Spruance (July 3, 1886 – December 13, 1969) was a United States Navy admiral during World War II. He commanded U.S. naval forces during two of the most significant naval battles that took place in the Pacific Theatre: the Battle of Midway and the Battle of the Philippine Sea. At Midway, Spruance scored the first major victory for the United States over Japan; most historians consider Midway the turning point of the Pacific War.Official Navy historian Samuel Eliot Morison characterized Spruance's performance as "superb", and said that he "emerged from this battle one of the greatest admirals in American naval history".Spruance was nicknamed "electric brain" for his calmness even in moments of supreme crisis, a reputation enhanced by his successful tactics at Midway. Read more on Wikipedia

Since 2007, the English Wikipedia page of Raymond A. Spruance has received more than 664,523 page views. His biography is available in 26 different languages on Wikipedia making him the 485th most popular military personnel.

Page views of Raymond A. Spruances by language