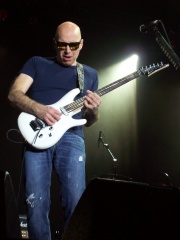 Joseph Satriani (born July 15, 1956) is an American guitarist, composer, songwriter, and guitar teacher. Early in his career, Satriani worked as a guitar instructor, with many of his former students achieving fame, including Steve Vai, Larry LaLonde, Rick Hunolt, Kirk Hammett, Andy Timmons, Charlie Hunter, Kevin Cadogan, and Alex Skolnick; he then went on to have a successful solo music career. He is a 15-time Grammy Award nominee and has sold over 10 million albums, making him the bestselling instrumental rock guitarist of all time.In 1988, Satriani was recruited by Mick Jagger as lead guitarist for his first solo tour. Read more on Wikipedia

Since 2007, the English Wikipedia page of Joe Satriani has received more than 3,667,328 page views. His biography is available in 48 different languages on Wikipedia (up from 46 in 2019). Joe Satriani is the 202nd most popular musician, the 1,193rd most popular biography from United States (down from 1,174th in 2019) and the 57th most popular American Musician.

Joe Satriani is a famous guitarist who has released many albums and written many songs. His most famous album is Surfing with the Alien.