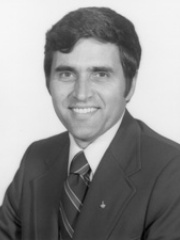 Harrison Hagan "Jack" Schmitt (born July 3, 1935) is an American geologist, retired NASA astronaut, university professor, former U.S. senator from New Mexico, and the most recent person living, and only person without a background in military aviation to have walked on the Moon. In December 1972, as one of the crew onboard Apollo 17, Schmitt became the first member of NASA's first scientist-astronaut group to fly in space. As Apollo 17 was the last of the Apollo missions, he also became the twelfth and second-youngest person to set foot on the Moon and the second-to-last person to step off of the Moon (he boarded the Lunar Module shortly before commander Eugene Cernan). Read more on Wikipedia

Harrison Schmitt is most famous for being the twelfth man to walk on the moon.