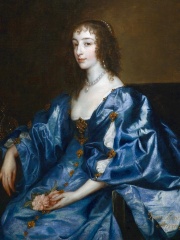 Henrietta Maria (French: Henriette Marie; 25 November 1609 – 10 September 1669) was Queen of England, Scotland, and Ireland from her marriage to King Charles I on 13 June 1625 until Charles was executed on 30 January 1649. She was mother of his two immediate successors, Charles II and James II and VII. Contemporaneously, by a decree of her husband, she was known in England as Queen Mary, but she did not like this name and signed her letters "Henriette R" or "Henriette Marie R" (the "R" standing for regina, Latin for "queen".)Henrietta Maria's Roman Catholicism made her unpopular in England, and also prohibited her from being crowned in a Church of England service; therefore, she never had a coronation. She immersed herself in national affairs as civil war loomed, and in 1644, following the birth of her youngest daughter, Henrietta, during the height of the First English Civil War, was compelled to seek refuge in France. Read more on Wikipedia

Henrietta Maria of France is most famous for being the wife of King Charles I of England.

Page views of Henrietta Maria of Frances by language

Among companions, Henrietta Maria of France ranks 117 out of 673. Before her are Maria Amalia of Saxony, Bianca Maria Sforza, Sawda bint Zamʿa, Frederica of Hanover, Caroline of Baden, and Anne of Bohemia and Hungary. After her are Gala Dalí, Carlos, Prince of Asturias, Zainab bint Muhammad, Umm Kulthum bint Muhammad, Victoria Eugenie of Battenberg, and Maria of Aragon, Queen of Portugal.