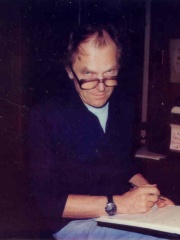 Paul Karl Feyerabend (; German: [ˈfaɪɐˌʔaːbn̩t]; January 13, 1924 – February 11, 1994) was an Austrian-born philosopher of science best known for his work as a professor of philosophy at the University of California, Berkeley, where he worked for three decades (1958–1989). At various points in his life, he lived in England, the United States, New Zealand, Italy, Germany, and finally Switzerland. His major works include Against Method (1975), Science in a Free Society (1978) and Farewell to Reason (1987). Read more on Wikipedia

Paul Feyerabend is most famous for his work in the philosophy of science. He is considered one of the most influential philosophers of science of the 20th century. He is best known for his "anything goes" approach to science, which he summed up in his slogan "anything goes".

Among philosophers, Paul Feyerabend ranks 223 out of 1,089. Before him are Hasan al-Basri, Hippias, Imre Lakatos, Gaston Bachelard, Diotima of Mantinea, and Joseph de Maistre. After him are Hippasus, Julia Kristeva, Slavoj Žižek, Franz Brentano, Chilon of Sparta, and Celsus.

Among PHILOSOPHERS In Austria