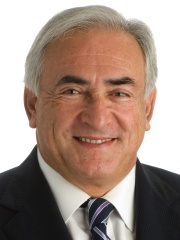 Dominique Gaston André Strauss-Kahn (French pronunciation: ​[dɔminik stʁos kan]; born 25 April 1949) is a French economist and politician who served as the tenth managing director of the International Monetary Fund (IMF). He is known as a figure in the French Socialist Party who attained notoriety due to his involvement in several sexual scandals. He is often referred to in the media, and by himself, by his initials DSK. Strauss-Kahn was appointed managing director of the IMF on 28 September 2007, with the backing of then–President of France Nicolas Sarkozy. Read more on Wikipedia

Dominique Strauss-Kahn is most famous for being the head of the International Monetary Fund (IMF) and for being accused of raping a hotel maid in New York.