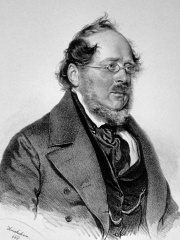 Georg Friedrich List (6 August 1789 – 30 November 1846) was a German-American economist who developed the "National System" of political economy. He was a forefather of the German historical school of economics, and argued for the German Customs Union from a Nationalist standpoint. He advocated imposing tariffs on imported goods while supporting free trade of domestic goods, and stated the cost of a tariff should be seen as an investment in a nation's future productivity.List was a political liberal who collaborated with Karl von Rotteck and Carl Theodor Welcker on the Rotteck-Welckersches Staatslexikon, an encyclopedia of political science that advocated constitutional liberalism and which influenced the Vormärz. Read more on Wikipedia

Friedrich List was a German economist who was most famous for his "National System of Political Economy" which advocated protectionism and government intervention in the economy.

Among ECONOMISTS In Germany