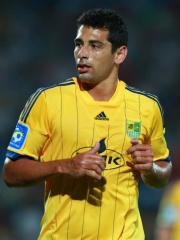 Diego de Souza Andrade (born 17 June 1985), known as Diego Souza, is a Brazilian professional footballer who plays as an attacking midfielder or a forward for Brazilian Série A club Grêmio. In a journeyman career, he played for ten clubs in the Campeonato Brasileiro Série A, including nine of the Big Twelve, having began at Fluminense in 2003. He also played for Sport Recife, where he was Série A top scorer in 2016.Souza also had brief spells in Portugal, Saudi Arabia and Ukraine. Read more on Wikipedia

Since 2007, the English Wikipedia page of Diego Souza has received more than 10,866 page views. His biography is available in 19 different languages on Wikipedia (up from 18 in 2019). Diego Souza is the 7,665th most popular soccer player (down from 6,686th in 2019), the 1,130th most popular biography from Brazil and the 702nd most popular Brazilian Soccer Player.