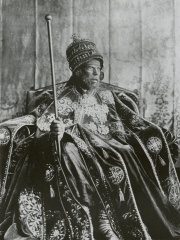 Menelik II GCB, GCMG (Ge'ez: ዳግማዊ ምኒልክ; Dagmäwi Menelik ; baptised as Sahle Maryam; 17 August 1844 – 12 December 1913) was Emperor of Ethiopia from 1889 to his death in 1913 and Negus (King) of Shewa (1866–89). At the height of his internal power and external prestige, the process of territorial expansion and creation of the modern empire-state was completed by 1898;Ethiopia was transformed under Emperor Menelik: the major signposts of modernisation with the help of key ministerial advisors, such as Gäbre-Heywät Baykädañ, were put in place. Externally, Menelik led Ethiopian troops, aided by Russia and France, against Italian invaders in the First Italo-Ethiopian War; following a decisive victory at the Battle of Adwa, recognition of Ethiopia's independence by external powers was expressed in terms of diplomatic representation at his court and delineation of Ethiopia's boundaries with the adjacent colonies. Read more on Wikipedia

Since 2007, the English Wikipedia page of Menelik II has received more than 784,406 page views. His biography is available in 44 different languages on Wikipedia making him the 1,696th most popular politician.

Among politicians, Menelik II ranks 1,686 out of 14,801. Before him are Georgios Papadopoulos, Manuel Azaña, Albert the Bear, Ferdinand I of Naples, Randal Cremer, and Pasquale Paoli. After him are Kurt Georg Kiesinger, Alexander, Catherine Jagiellon, Tvrtko I of Bosnia, King Wu of Zhou, and Kamehameha I.

Among people born in 1844, Menelik II ranks 18. Before him are Umberto I of Italy, Alexandra of Denmark, Pablo de Sarasate, Peter I of Serbia, Friedrich Ratzel, and Mary Cassatt. After him are Klas Pontus Arnoldson, Muhammad Ahmad, Friedrich Miescher, Alfred, Duke of Saxe-Coburg and Gotha, `Abdu'l-Bahá, and Charles-Marie Widor. Among people deceased in 1913, Menelik II ranks 7. Before him are Rudolf Diesel, Ferdinand de Saussure, Alfred Russel Wallace, George I of Greece, J. P. Morgan, and Alfred von Schlieffen. After him are Tokugawa Yoshinobu, Josephine Cochrane, Sophia of Nassau, August Bebel, Lesya Ukrainka, and Harriet Tubman.