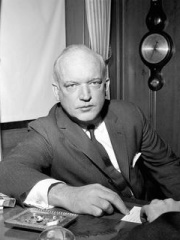 James Britt Donovan (February 29, 1916 – January 19, 1970) was an American lawyer and United States Navy officer in the Office of Scientific Research and Development and the Office of Strategic Services (OSS, predecessor of the Central Intelligence Agency), ultimately becoming general counsel of the OSS, and an international diplomatic negotiator.Donovan is widely known for negotiating the 1960–1962 exchange of captured American U-2 pilot Francis Gary Powers for Soviet spy Rudolf Abel, and for negotiating the 1962 release and return of 9,703 prisoners held by Cuba after the failed Bay of Pigs Invasion. Read more on Wikipedia

Since 2007, the English Wikipedia page of James B. Donovan has received more than 3,329,787 page views. His biography is available in 16 different languages on Wikipedia making him the 1,639th most popular writer.

Page views of James B. Donovans by language

Among writers, James B. Donovan ranks 1,636 out of 4,883. Before him are Ion Creangă, Martin of Opava, Thomas Merton, Paul Gerhardt, Wayne Dyer, and Miguel Hernández. After him are Bob Woodward, Alexander Kielland, Gaius Julius Solinus, Stephen Crane, Enzo of Sardinia, and Elizabeth George.