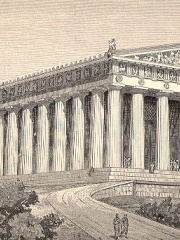 Callicrates or Kallikrates (; Greek: Καλλικράτης [Kaliˈkratis]) was an ancient Greek architect active in the middle of the fifth century BC. He and Ictinus were architects of the Parthenon (Plutarch, Pericles, 13). An inscription identifies him as the architect of "the Temple of Nike" on the Acropolis of Athens (IG I3 35). The temple in question is either the amphiprostyle Temple of Athena Nike now visible on the site or a small-scale predecessor (naiskos) whose remains were found in the later temple's foundations.An inscription identifies Callicrates as one of the architects of the Classical circuit wall of the Acropolis (IG I3 45), and Plutarch further states (loc. Read more on Wikipedia

Callicrates is most famous for being the architect of the Parthenon.

Page views of Callicrates by language

Among architects, Callicrates ranks 42 out of 424. Before him are Suger, Hippodamus of Miletus, Ictinus, Jørn Utzon, Vladimir Tatlin, and I. M. Pei. After him are Giacomo Barozzi da Vignola, Rem Koolhaas, Christopher Wren, François Mansart, Arne Jacobsen, and Richard Rogers.

Others Deceased in 420 BC

Among ARCHITECTS In Greece