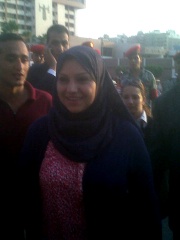 Asmaa Mahfouz (Egyptian Arabic: أسماء محفوظ‎, pronounced [ʔæsˈmæːʔ mɑħˈfuːz, ˈʔæsmæ-], born 1 February 1985) is an Egyptian activist and one of the founders of the April 6 Youth Movement. She has been credited by journalist Mona Eltahawy and others with helping to spark a mass uprising through her video blog posted one week before the start of the 2011 Egyptian revolution. She is a prominent member of Egypt's Coalition of the Youth of the Revolution and one of the leaders of the Egyptian revolution.In 2011 she was one of five recipients of the "Sakharov Prize for Freedom of Thought", awarded for contributions to "historic changes in the Arab world". Read more on Wikipedia

Among SOCIAL ACTIVISTS In Egypt