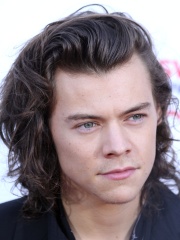 Harry Edward Styles (born 1 February 1994) is an English singer, songwriter and actor. His musical career began in 2010 as a solo contestant on the British music competition series The X Factor. Read more on Wikipedia

Since 2007, the English Wikipedia page of Harry Styles has received more than 19,260,290 page views. His biography is available in 51 different languages on Wikipedia making him the 3,445th most popular actor.

Among people born in 1994, Harry Styles ranks 11. Before him are Kepa Arrizabalaga, Memphis Depay, Emre Can, Kai, Maluma, and Federico Bernardeschi. After him are Marquinhos, Raheem Sterling, Mateo Kovačić, Otto Warmbier, Bernardo Silva, and Duncan Laurence.