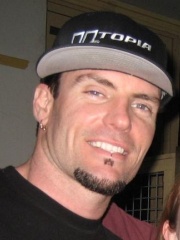 Robert Matthew Van Winkle (born October 31, 1967), known professionally as Vanilla Ice, is an American rapper, actor, and television host. Born in South Dallas, and raised in Texas and South Florida, Ice released his debut album, Hooked, in 1989 on Ichiban Records, before signing a contract with SBK Records, a record label of the EMI Group, which released a reformatted version of the album in 1990 under the title To the Extreme which became the fastest-selling hip hop album of all time and contained Ice's best-known hits: "Ice Ice Baby" and a cover of "Play That Funky Music". Read more on Wikipedia

Among singers, Vanilla Ice ranks 808 out of 3,541. Before him are Verka Serduchka, Naná Vasconcelos, Laurel Aitken, Travis Scott, Camillo Felgen, and Ingvar Wixell. After him are Sami Yusuf, Riccardo Fogli, Dr. John, Gregg Allman, Michael Bublé, and The Weeknd.