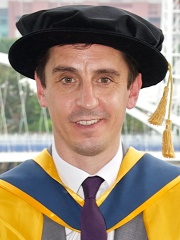 Gary Alexander Neville (born 18 February 1975) is an English football coach and former player who is a co-owner of Salford City. After retiring from football in 2011, Neville went into punditry and was a commentator for Sky Sports, until he took over the head coach position at Valencia in 2015. After being sacked by the club in 2016, he returned to his position as a pundit for Sky Sports later that year. Read more on Wikipedia

Since 2007, the English Wikipedia page of Gary Neville has received more than 3,685,018 page views. His biography is available in 56 different languages on Wikipedia making him the 1,376th most popular soccer player.