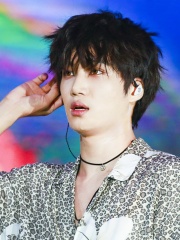 Kim Jong-in (Korean: 김종인; born January 14, 1994), better known as Kai (Korean: 카이), is a South Korean singer, model, actor, and dancer. He is a member of the South Korean-Chinese boy group Exo, its sub unit Exo-K, and South Korean supergroup SuperM. He debuted as a soloist in November 2020 with the release of his extended-play, Kai (开). Apart from his musical career, Kai has also starred in various television dramas such as Choco Bank (2016), Andante (2017), and Spring Has Come (2018). Read more on Wikipedia

Page views of Kais by language

Among people born in 1994, Kai ranks 7. Before him are Justin Bieber, Halsey, J-Hope, RM, Kepa Arrizabalaga, and Dakota Fanning. After him are Emre Can, Harry Styles, Saoirse Ronan, Memphis Depay, Hakan Çalhanoğlu, and Otto Warmbier.