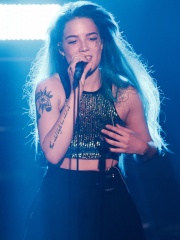 Ashley Nicolette Frangipane (IPA: FRAN-jih-PAH-nee; born September 29, 1994), known professionally as Halsey ( HAWL-zee), is an American singer and songwriter. She was born and raised in New Jersey. Gaining attention from self-released music on social media platforms, she was signed by Astralwerks in 2014 and released her debut EP, Room 93, later that year. Read more on Wikipedia

Page views of Halseys by language

Among people born in 1994, Halsey ranks 3. Before her are Justin Bieber and RM. After her are Kepa Arrizabalaga, Memphis Depay, J-Hope, Kenneth Zohore, Dakota Fanning, Harry Styles, Kai, Hakan Çalhanoğlu, and Dimash Kudaibergen.