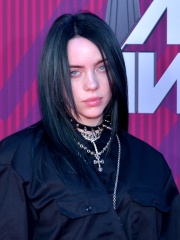 Billie Eilish Pirate Baird O'Connell ( EYE-lish; born December 18, 2001) is an American singer and songwriter. She first gained attention in 2015 when she uploaded the song "Ocean Eyes" to SoundCloud, which was subsequently released by the Interscope Records subsidiary Darkroom. The song was written and produced by her brother Finneas O'Connell, with whom she collaborates on music and live shows. Read more on Wikipedia

Forbes
Billie Eilish, Bad Bunny, The Weeknd And Roddy Ricch: 5 Songs Making Moves On The Hot 100
As Lil Durk and Lil Baby prove their incredible popularity by claiming almost 20% of the entire Hot 100 to themselves (both of them!)
Hugh McIntyre, Contributor, Hugh McIntyre, Contributor https://www.forbes.com/sites/hughmcintyre/
Dazed
Billie Eilish says she was ‘very angry’ about how fame changed her life
‘I was a kid and I wanted to do kid shit. I didn’t want to be not able to fucking go to a store or the mall’
Thom Waite
Just Jared
Lorde Opens Up About Billie Eilish: 'There's Only a Handful of People Who Understand What That's Like'
Lorde is opening up about Billie Eilish. The 24-year-old “Solar Power” singer sat down for an interview with Annie Mac for BBC Radio. During the interview, Lorde was asked about the 19-year-old Happier Than Ever singer. Click inside to read more… “I see so ma…
Just Jared
CinemaBlend
Amidst Controversy, Billie Eilish Talks Internet Hate And How It’s Tied With Fandom In Candid New Interview
The No Time To Die singer is under hot water with some fans for old videos being called racist.
Sarah El-Mahmoud