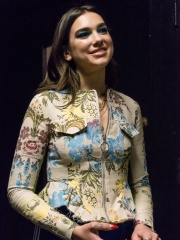 Dua Lipa (; Albanian pronunciation: [ˈdua ˈlipa]; born 22 August 1995) is an English singer and songwriter. After working as a model, she signed with Warner Music Group in 2015 and released her self-titled debut album in 2017. The album peaked at number three on the UK Albums Chart, and produced nine singles, including "Be the One" and "IDGAF", and the UK number-one single "New Rules", which also peaked at number six in the US. Read more on Wikipedia

Since 2007, the English Wikipedia page of Dua Lipa has received more than 23,908,336 page views. Her biography is available in 55 different languages on Wikipedia making her the 835th most popular singer.