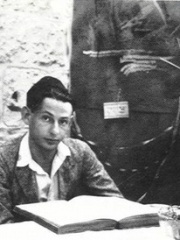 Gershom Scholem (Hebrew: גֵרְשׁׂם שָׁלוֹם) (5 December 1897 – 21 February 1982), was a German-born Israeli philosopher and historian. Widely regarded as the founder of modern academic study of the Kaballah, Scholem was appointed the first professor of Jewish Mysticism at Hebrew University of Jerusalem.Scholem is acknowledged by the sages as the single most significant figure in the recovery, collection, annotation, and registration into rigorous Jewish scholarship of the canonical bibliography of mysticism and scriptural commentary that runs through its primordial phase in the Sefer Yetzirah, its inauguration in the Bahir, its exegesis in the Pardes and the Zohar to its cosmogonic, apocalyptic climax in Isaac Luria's Ein Sof that is known collectively as Kabballah.After generations of demoralization and assimilation in the European enlightenment, the disappointment of messianic hopes, the famine of 1916 in Palestine, and the catastrophe of the Final Solution in Europe Scholem gathered and reassembled these sacred texts from many of the archives that had been disarranged, orphaned, confiscated under Nazi rule or otherwise washed up in Genizah cataloging the flood of fragments and disordered, decontextualized manuscripts into an annotated and relatively organized sequence of texts available to scholars and seekers within the reception of this tradition. Read more on Wikipedia

Gershom Scholem is most famous for his work in the field of Jewish mysticism.