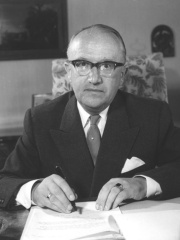 Walter Hallstein (17 November 1901 – 29 March 1982) was a German academic, diplomat and statesman who was the first President of the Commission of the European Economic Community and one of the founding fathers of the European Union. Hallstein began his academic career in the 1920s Weimar Republic and became Germany's youngest law professor in 1930, at the age of 29. During World War II he served as a First Lieutenant in the German Army in France. Read more on Wikipedia

Among politicians, Walter Hallstein ranks 2,821 out of 15,710. Before him are Marcel Cerdan, Eleonora Gonzaga, Abd al-Karim Qasim, Bagoas, Charles VII of Sweden, and Ottokar I of Bohemia. After him are Lij Iyasu of Ethiopia, Qutb al-Din Aibak, Wilfred the Hairy, Emperor Higashiyama, Émile Lahoud, and Mary, Princess Royal and Princess of Orange.