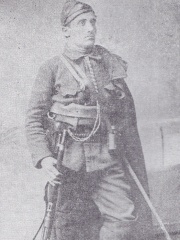 Vlado Chernozemski (Bulgarian/Macedonian: Владо Черноземски; born Velichko Dimitrov Kerin, Bulgarian: Величко Димитров Керин; 19 October 1897 – 9 October 1934), was a Bulgarian revolutionary. Also known as "Vlado the Chauffeur", Chernozemski is considered a hero in Bulgaria today, and in his time, in Croat circles and in the Macedonian Bulgarian diaspora. His contribution to the idea of Independent Macedonia has also won him a similar status in some Macedonian circles today, but the official historiography in North Macedonia still regards him a controversial Bulgarian.Chernozemski began his revolutionary activities in 1922, when he joined the Internal Macedonian Revolutionary Organization (IMRO). Soon after, he became an assassin for the IMRO. Read more on Wikipedia

Vlado Chernozemski is most famous for his role in the Chernobyl nuclear disaster. Chernozemski was a worker at the Chernobyl nuclear power plant who, on the night of April 26th, 1986, was instructed to turn off the control rods that were being used to stop the nuclear reaction in reactor number four. The rods were turned off, but the reactor continued to overheat, leading to a rupture in the reactor and a series of explosions. Chernozemski was one of the few people to survive the disaster.

Among social activists, Vlado Chernozemski ranks 103 out of 544. Before him are Judas of Galilee, Flora Tristan, Huda Sha'arawi, Ishikawa Goemon, Gerald Durrell, and Meng Huo. After him are Amílcar Cabral, Kim Hyong-jik, Mordechai Anielewicz, An Jung-geun, Rashid ad-Din Sinan, and Vasil Levski.

Among SOCIAL ACTIVISTS In Bulgaria

Among social activists born in Bulgaria, Vlado Chernozemski ranks 1. After him are Vasil Levski (1837).